Net Savings Link Inc. said its cannabis division will open an office in Shanghai, China, next month to expand its medical marijuana technology business into the world’s most populous country.

The company, based in Cresco, Pennsylvania, said in a news release it is moving into China because it sees a sizable opportunity there.

China is the world’s largest producer of cannabis sativa seeds, producing nearly 40% of the world’s supply, according to Net Savings Link, which trades on the…

A marijuana exchange-traded fund – billed as the world’s first – began trading on the Toronto Stock Exchange on Wednesday, the latest sign the cannabis industry is becoming more of a mainstream sector. 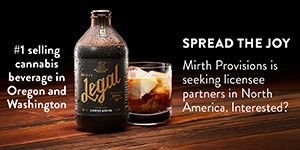 An exchange-traded fund owns and tracks certain assets and,… According to Business Insider Australia, the medical grade cannabis company will use the funds for clinical trials and research and development involving pharmaceutical-grade MMJ products.

The company is also seeking acquisition prospects at home and abroad in the MMJ industry, Business Insider Australia reported.

Another Denver-based company connected to the marijuana trade revealed this week it has completed a $1.65 million round of fundraising.

GrowGeneration Corp., an ancillary business that specializes in gardening supplies for commercial and home grows, told the Denver Business Journal it secured the funds in equity financing from Merida Capital Partners, “a cannabis infrastructure fund.”

GrowGeneration is the second Denver-based firm this week to announce a capital raise of over $1 million. Baker, a cannabis software business, raised $1.6…

ASTM International, a 119-year-old organization that develops voluntary standards for a long list of items ranging from children’s toys to aircraft, plans to add cannabis to that list.

For the most part, the cannabis industry has lacked developed product standards. That could now change, another sign that cannabis is becoming more of a mainstream product.

According to the Denver Post, ASTM International launched a committee earlier this week to discuss and develop standards for personnel training, cultivation and security in the…

The Trump administration hints at possible enforcement on recreational cannabis businesses, thousands of Northern California cultivation jobs are in jeopardy, and a new marijuana investment fund is in the works.

The cannabis industry erupted when the White House press secretary on Thursday intimated the recreational market could be in for a serious fight.

During a news conference, Press… The ETF Managers Group is proposing the Emerging AgroSphere ETF, which could be a first for the cannabis industry, Reuters reported.

An exchange-traded fund owns and tracks certain assets and, unlike a mutual fund, can be traded like a regular stock.

The move comes after the company made history last summer when it became the first marijuana cultivator to list on a major North American exchange.

Canopy announced its switchover from ticker symbol CGC on Wednesday and rang in its new era that morning by opening the TSX’s daily trading session.

In what is a possible international first, a Canadian company has announced it will operate a pair of dispensaries in Arizona through a recently acquired management firm.

The deal, which cost the Canadian Bioceutical Corporation $27 million dollars (CA$35.5 million), also gives the the company ownership of a natural health products company, CGX Life Sciences, as a subsidiary, as well as the rights to license intellectual property from Melting Point Extracts, another Arizona-based medical marijuana company.

The Canadian corporation, which…

MassRoots, the popular social network for cannabis enthusiasts, said it has received more than $2 million in cash from the exercise of warrants so far in 2017, providing additional financial stability to the once-wobbly Denver company. “This capital infusion will help us continue building momentum with the success we are having within the rapidly emerging legal cannabis industry,” MassRoots CEO Isaac Dietrich said in a news release. “We can now better focus our attention toward increasing revenue, expanding our market presence and…

MassRoots and MJ Freeway announced a partnership under which MJ Freeway’s technology will enable live online menu pricing for its dispensary clients via the MassRoots platform.

The deal is similar to a recent one struck between MJ Freeway, a Denver-based seed-to-sale tracking company, and the online retail guide Weedmaps.

“This partnership will enable seamless communications between MJ Freeway’s thousands of dispensary clients and MassRoots’ community of hundreds of thousands of cannabis consumers,” MassRoots CEO Isaac…

The cannabis-focused real estate investment trust (REIT) closed down 4.25%. Trading under the ticker symbol IIPR, it finished the day at $19.15 per share, or 85 cents below its initial offering price of $20. The company’s shares briefly touched $20.52 after the opening bell but then dropped throughout the day.

The company, headquartered in San Diego but…

Colorado-based Helix TCS, which has been expanding its holdings in the marijuana trade, announced Monday it has become the largest shareholder in Florida-based BioTrackTHC, a longtime manufacturer and supplier of seed-to-sale cannabis tracking software.

Helix and its capital partner, Rose Capital Advisors of Miami Beach, agreed to purchase the shares from BioTrackTHC founders Steven Siegel and Brian McClintock for a combination of cash and stock, making Helix and Rose the largest BioTrackTHC…

The decades-old Zacks Investment Research is recommending four “cannabist-related” companies – including some household names – for stock investors wanting to cash in on the so-called marijuana “green rush.”

The stock research firm, founded in 1977, projects that Tuesday’s election will yield yes votes in several states where marijuana legalization initiatives are on the ballot. “This is reminiscent of 1933, when drinking cold beer after work was made legal,” according to an “analyst blog” on the Zacks website….

Canadian medical cannabis producer Emblem is set to go public next month on the TSX Venture Exchange, the electronic exchange owned by the parent of the Toronto Stock Exchange.

The Ontario company is the latest federally licensed medical marijuana cultivator to list its shares on an exchange, thanks to Canada’s legalized MMJ industry.

Emblem President John Stewart told MoneyShow.com the IPO will come out next month and trade under the symbol EMC. Stewart said the company hasn’t yet priced the offering but that it’s likely to fall…

By Bart Schaneman and John Schroyer

San Diego: First of many crackdowns?

San Diego has teamed with a coalition of licensed medical cannabis businesses to crack down on illegal MMJ storefronts and, perhaps more important, to educate consumers about which…

MassRoots, the publicly traded cannabis-centric social media site, said Friday it has repaid its creditors after disclosing last month it had missed nearly $1 million in payments that were due to holders of its convertible notes.

“We’re excited to have this debt fully repaid and behind us. We expect MassRoots will be cash-flow positive on a monthly basis by the end of the year,” MassRoots CEO Isaac Dietrich said in a news release filed with the Securities and Exchange Commission. The Denver company said last month it had missed some…

By Omar Sacirbey and John Schroyer

MassRoots lands in financial hot water, GW Pharmaceuticals takes a step closer to winning U.S. approval for its marijuana-based drug, and a political veteran urges caution heading into the elections.

That’s the assessment of Nic Easley, the CEO of Denver’s 3C Consulting. He looked closely at the company’s situation following news that the cannabis-themed social network failed to…

British cannabis company GW Pharmaceuticals has conducted a successful clinical trial in which it treated epileptic children with one of its marijuana-based drugs, triggering a surge in the company’s stock price.

According to Reuters, tested doses of GW Pharmaceutical’s drug Epidiolex “were found to have induced a statistically significant improvement in reducing seizures” in patients with a particular type of epilepsy during phase III clinical trials. On Monday, after news of the trials broke, the publicly traded company’s stock…

California-based Medical Marijuana Inc. and Native American company CannaNative have put together a hemp-derived CBD product line to be sold on tribal lands.

The companies said in a news release Monday that Medical Marijuana Inc. and its HempMeds subsidiary will produce the product line, which will be sold under the CannaNative brand.

It will be offered at tribal wellness centers, native doctor’s offices, pharmacies, and dispensaries on tribal lands. It is “intended to help the more than 560 U.S. tribal nations develop hemp- and…

The partnership, announced by the companies, will bring new weight to Cannabase’s pricing and inventory information, given that it will now be backed by MJ Freeway’s and BioTrackTHC’s data. In a news release, Cannabase said the arrangement would provide:

In what could be a first in both the cannabis industry and stock market history, a large marijuana cultivation company will list on a major North American stock exchange.

“The addition of Canopy Growth helps signal that the world’s view of cannabis has finally shifted, starting right here in Canada,” said Canopy CEO Bruce Linton in a…

If successful, Medlab Clinical plans to spend the money to accelerate a program of human trials of cannabis-based pain management therapy for cancer patients at one of Australia’s top oncology research hospitals, Business Insider Australia reported. According to Medlab’s filing with the Australian Securities Exchange, the company…